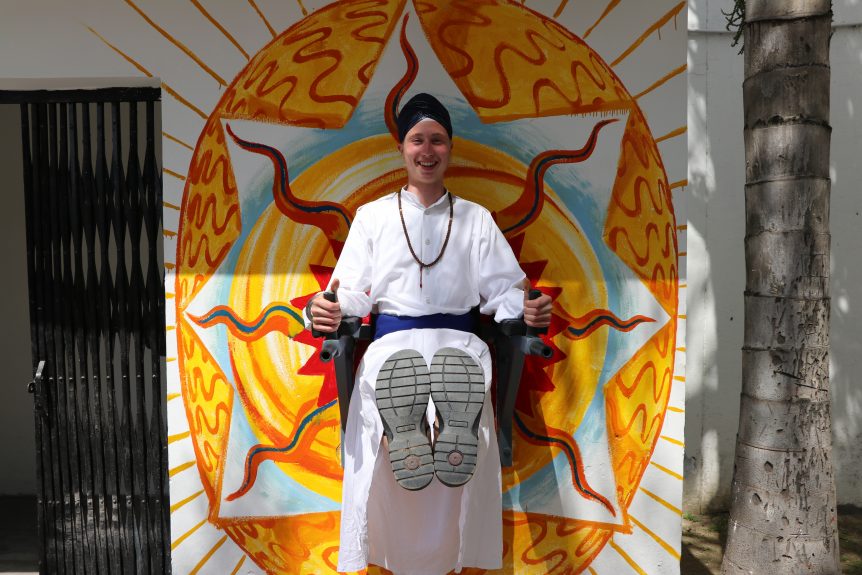 Hans Werner graduated in 2016 after attending MPA for three years. After graduating he spent some time figuring out his next step knowing that he wanted to pursue art in a way where he could work on big projects that involved collaboration with a lot of people. In October 2017 he started a five year program studying costume and set design in Germany.

Did you have any problem getting into the school because of graduating from MPA?
That was okay because they were more focused on my artistic skills. I applied first with a portfolio, my grades and some writing and then they invited me for an interview and a three-day exam where they checked if I would be a good fit for that school. So there were things other than my grades that they were looking for.
You’ve been interested in art for a long time. How did you keep up during your time at MPA?

The library with the mural that Hans created when he was a student.

I think I wasn’t actively working on art here because that’s not the main focus of MPA but I think the space I was in, in relation to yoga and meditation also gave me a different view of creativity and that helped me in my arts. I had done yoga before coming to MPA but not as intense as I had it here. I never had a daily practice for myself which I now have evolved into. I also had a lot of inspiration from being in India and the place that I was living in.

I think that the core of myself hasn’t really changed throughout my life but that I receive new tools here and there. Sometimes it’s hard to handle so many tools because I’ve got so many, including the ones I received at MPA like martial arts, music, yoga. There were so many things that I wanted to do and things that the other students were focusing on. Sometimes it was hard to remember that I had art as my thing.
Since you’ve left MPA have you kept up a daily practice?
Yes. Sometimes more, sometimes less but I keep up every day.
Has that been easy for you or have you struggled to keep up a practice?

It seems to be easier for me than for others. I really enjoy having something regular every day. Sometimes it’s hard, of course, because of my life as a student and the college I’m in now. Most of my classmates are in a totally different daily rhythm. As humans or as artists my classmates are not too different from me but their habits, their rhythm and often their attitudes are different. I think I’m in a good space where I can still communicate with them. It’s not that I’m like a total outsider but all those differences make it hard to have a relationship with my classmates and still stay on my own rhythm. For example, they often start their party life at 9pm, when I getting tired and want to go to bed so I can get up early in the morning and do my sadhana.

Now that you’ve had some time away from MPA. What do you think it gave you?

Hans participating in the marching competition 2018

MPA gave me lot of stability to know myself and to have my right to be happy as I am. And to approach others from my center while also being open to them. And I think this is what I really needed to learn after MPA. We have all the tools that we get here. We learn many techniques which I really include into my daily life. What was hard for me to see was that we tend to think that we’re something higher because we went to this crazy school, we went to India for however many years and we learned so many things. We had so many people telling us how they would have liked to have been in our place. It was hard for me to get out of this mindset after being in something really special. What I had to learn was to listen to what other people learned. Sometimes they have also learned really valuable things that I could learn from them. So I recommend to others to really step into exchange with other people too. It’s good to keep the connection with the people, the friends and the teachers you had here, but also to really learn how to be able to communicate with and to step in contact with other people that live a different life. Because this is the real world then around you. There’s rarely anyone understanding what you do.

No. I didn’t wear a turban before coming to MPA. At the beginning maybe it was challenging to wear a turban. After my first year at MPA, I went home in the summer and pretty much went back to my old life. My second year I was already more inspired to come and had the determination to finish my schooling here. So when I finished I already had that expansion and the trajectory to do that. So I was already pretty set that I was going to wear my turban, not cut my hair, and do the things that feel right to me. So now it’s very stable for me, there’s no big problem.